Living in Ireland you will sooner or later come across some common Irish sayings and slang words. But do you really know what them all mean? Don’t worry, you can learn a few here. Check them out now:

It is known as a greeting, similar to ‘How are you?’ or ‘What is happening in your life since we last met?’ but it is related to some news, fun, gossip or enjoyment.

If nothing like that has happened so far, a typical answer could be ‘not much’.

The word ‘grand’ is defined in English as magnificent, large, major or excellent. However, in Ireland, it means just fine/ okay or good, which is the same as saying ‘It’s fine’.

Usually, this slang is used to respond when someone asks an Irish person how they are, so they reply ‘I’m grand’ instead of ‘I’m fine’.

The word ‘awful’ is defined in the dictionary as extremely bad, unpleasant, dreadful, terrible. However, in Ireland, it can also mean ‘very’. So, in this case, ‘The weather is awful good.’ is similar to saying ‘The weather is very good’.

It can also be used to intensify negative situations for example:

“They were awful cranky!” = “They were very cranky”

Note: Some of the Irish sayings and slang examples were extracted from The Irish Store blog.

If you are a non-native English speaker, living in Ireland, and want to learn or improve your English language skills, we provide basic, QQI level 3, 4 and Fáilte Isteach English Conversation Courses for Adults.

Attending an ESOL (English for Speakers of Other Languages) class can help you with your academic path, to gain confidence in seeking a job in Ireland or help you to settle into Dublin’s community. 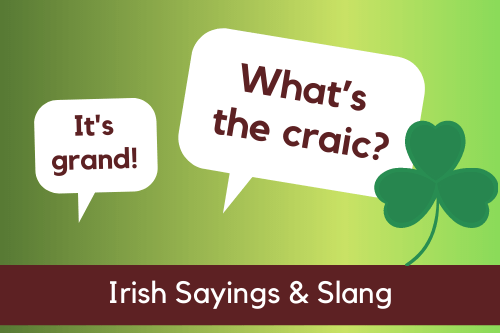